Dätcha Mandala is a trio caught up in the heavy blues of the 70s. Dätcha Mandala seduces with overpowering and electrifying guitars, transcendent voices and energy with a highly communicative power. Dätcha Mandala turns the blues into rock without thinking about it. Sometimes more spiritual, the group creates with its music a mystical psychedelism with oriental accents. The trio has performed more than 450 concerts across Europe and released „ROKH“ on Mars Red Sound on November 10, 2017, the first album entirely in analogy to Clive Martin (Queen, Midngiht Oil, Skunk Anansie …) was produced. This album follows the single „Anâhata“ from the same studio session released on September 22, 2016. In 2017 they were part of the „Anâhata“ tour for 22 gigs in the opening act of Hayseed Dixie. Dätcha Mandala have a long list of festivals and live gigs and have already proved themselves to an audience of 30,000 people. For the release show for the longplayer „ROKH“, 900 fans flocked to the venue in France. 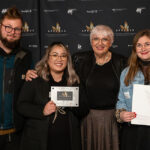