Finding humour in the seemingly inescapable collapse of the human race. It might not be the most conventional approach to a record, but Cassels have already proved themselves to be anything but traditionalists. Made up of brothers Jim and Loz Beck, the duo spent their youth rallying against the calm, countryside boredom of growing up in a small village in the Oxfordshire—developing a sound characterised by a maelstrom of erratic instrumentation and punk-inflected vocals. Over the course of two LPs, a compilation of early EPs and singles, Cassels have operated outside of strict genre distinctions, both accumulating a loyal fanbase and winning plaudits along the way.

Drawing on influences from the agitated post-punk of Shellac to the rasping indie of Modest Mouse, it isn’t surprising that pigeonholing the duo is no easy task. Since their 2015 debut EP, “Hating Is Easy”, they’ve continued to evolve into an ever more indefinable outfit, all the while tackling weighty subjects ranging from social anxieties to estranged politics. The combination is an exciting, at times slightly intimidating, sound. Music for misanthropes and malcontents.

Support comes from Brighton based feminist electro-punk Trio CLT DRP. Spending the last 18 months finding their feet as individuals and as a collective band again, latest single ‘Ownership’ is the first look at new material from the band since the release of their rave-reviewed debut album Without The Eyes in 2020, and sees a further evolution of their eclectic, experimental approach to fusing electronic and punk music in boundary breaking fashion.
Somewhere between EDM inspired electro-punk and quasi-satirical female pop, the new single delves deeper into their ever-changing sonic world, with guitarist Scott revealing influence from Mr. Oizo’s seminal hit ‘Flat Beat’. 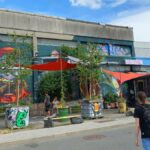